I’ll admit it, I look at some fashion websites. It’s a good source of inspiration for me, even if 99% of what’s shown is a perpetual theme and variation on one thing — Black.

I’m just NOT that person.

And don’t get me going on sleeveless jackets for men!

I’ve been drawn to the work of Junya Watanabe for the past few seasons, especially his offerings for spring / summer. I didn’t realize that he collaborated with Brooks Brothers a couple of years ago, which on some subliminal level may explain my attraction to his clothes. There’s a definite “prep” vibe, but in a very light handed, whimsical way. I do like traditional style, and it’s “age appropriate” for me; but I don’t want to look like an old fuddy duddy either.

I love all these little details. Pockets, piping, patchwork. So my goal is to create my own version.

I’m also interested in the look of Engineered Garments. In particular the “fishing vest” look worn over a jacket.

I love this short over long look. I’m not sure I can pull it off, but I’m gonna try! 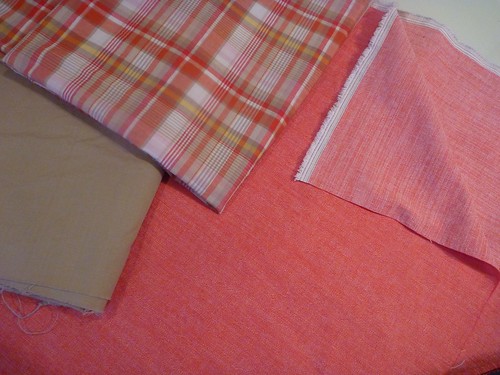 Here are the fabrics I’ve chosen. A heavy red “Oxford cloth” suiting that’s been in my stash for a couple of years now. I bought this sight unseen from Denver Fabrics for something like $3 / yard. It’s got an interesting weave, so the front and back are entirely different. I’ll be using both the light and dark sides for the body of the jacket. Even though I’ve washed and dried this fabric twice, it’s still quite stiff. It makes me wonder what it was really intended for. Upholstery maybe? Hopefully it won’t be the downfall of the whole project. The other fabrics are a madras plaid and a khaki cotton with a subtle grid texture. 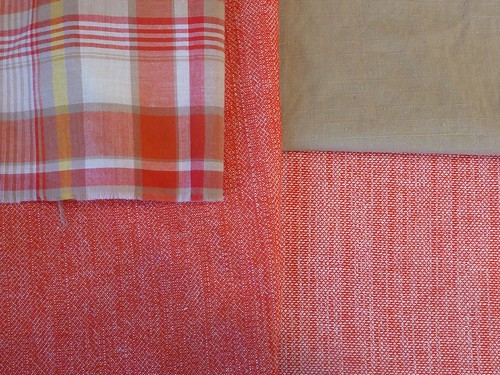 This photo shows the textures a little better. 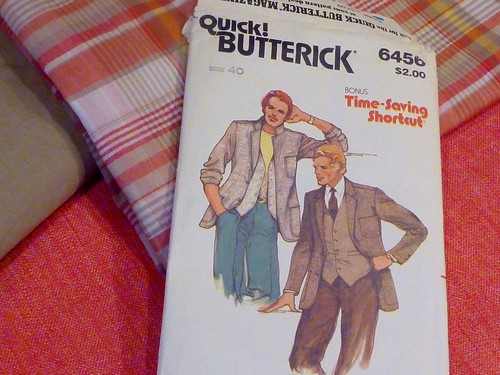 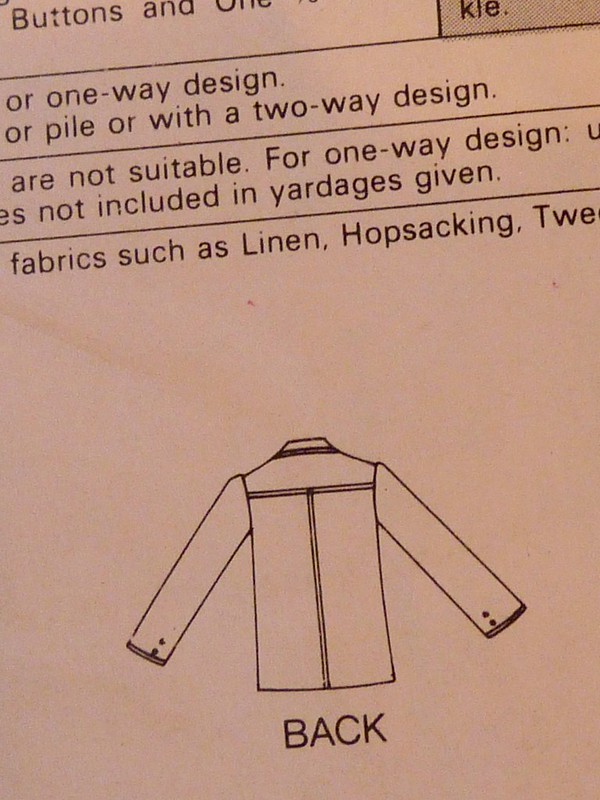 I’m going to be using this Butterick pattern for an unlined blazer. As you may recall this pattern didn’t make the cut for the “Phoney Missoni” jackets. Still, I’m intrigued by the yoke and the unfitted boxy style. The goal is an unstructured jacket that I can throw on over a polo shirt or a t-shirt. The spring barn jacket alternative? Perhaps.

I won’t go into all the gory details, but I fought with the muslin for what seemed like days. Maybe picking this pattern wasn’t such a good idea after all. The “intriguing yoke” rapidly lost all its appeal! In the end I felt that I was really grasping at straws to get the damn thing to look halfway presentable. There’s definitely a point of diminishing returns with fitting, and I’d reached it. To preserve my sanity I decided to move on, cut it out and hope for the best.

In short, here’s the rundown of what happened….

The ease was removed the the sleeve cap.

The apex of the sleeve cap was moved forward.

The armscye was enlarged (it was uncomfortably high at the underarm).

Excess fabric was removed from the upper back.

The side and back seams were taken in slightly.

Will any of this work? Here’s hoping.

10 thoughts on “Getting Started — The Watanabe Jacket”