Forget robins and bulbs poking up out of the ground.  Here’s the surest sign of Spring anywhere!

These guys hatched the day after Valentine’s Day. 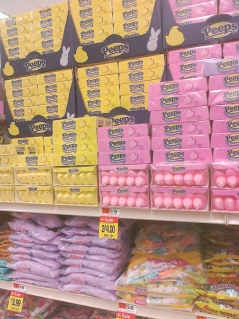 I have to admit that I totally love all the pastel candy colors that emerge this time of year.  It’s interesting that what could be considered the most feminine of colors, play such a huge part in most men’s wardrobes.  I grew up wearing pastel oxford cloth buttondowns, and I still think of them as the quintessential man’s shirt.  They just have so much going for them.  The fabric is substantial and durable.  They’re appropriate for just about any occasion.  They look good with or without a tie.  They can be pressed or wrinkled.  The fit tends to be baggy and comfortable.
So all of this leads me into my next shirt project…. The Springy Buttondown.

The fabric is a dusty teal oxford cloth that I picked up from Denver Fabrics .  They feature a lot of cotton shirting, but this was the only oxford cloth on the site.   As luck has it, it’s a color that looks particularly good on me.
I’ll be using a vintage Butterick pattern that I believe dates from the early 60’s.  I used this pattern for Peter’s MPB shirt sew-along last year, so this will be my third version of it.  Truthfully,  I’ve altered it so much that it really has very little of the original left.  Every time I make it, I feel the need to give it a little tweak.  Someday I’ll get it just right. 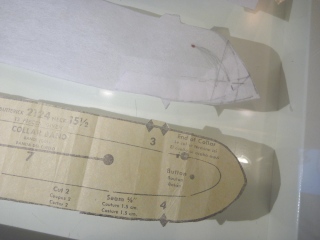 This time around I’ve decided to revamp the collar stand.  This has always been a source of frustration with this pattern.  The curve at the end of the stand is near impossible to sew.  I pin the stand on, matching the notches, but when I get to the neck opening it’s a “What the F.. now” moment.  Consequently it’s always a mess.   It’s just not working for me.  So here’s my attempt at a fix.  I’ve flattened out the curve trying to keep the overall length the same.  It will either work or not.  Right? 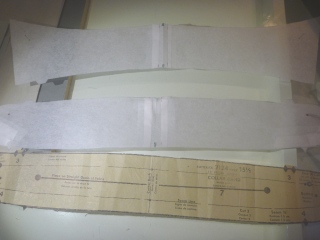 And while I’m making changes I measured the neck opening and decided that the stand and collar could be a scant 1/2″ larger.  When I made a pretty drastic sloped shoulder adjustment to this pattern I needed to drop the front neck opening.  This added some length to the neck opening.  Again, this will either work or not.  I really want to avoid fighting to get a too small collar stretched into a too large neck opening.


I’m going to go eat a few Peeps, and then get this shirt cut out.