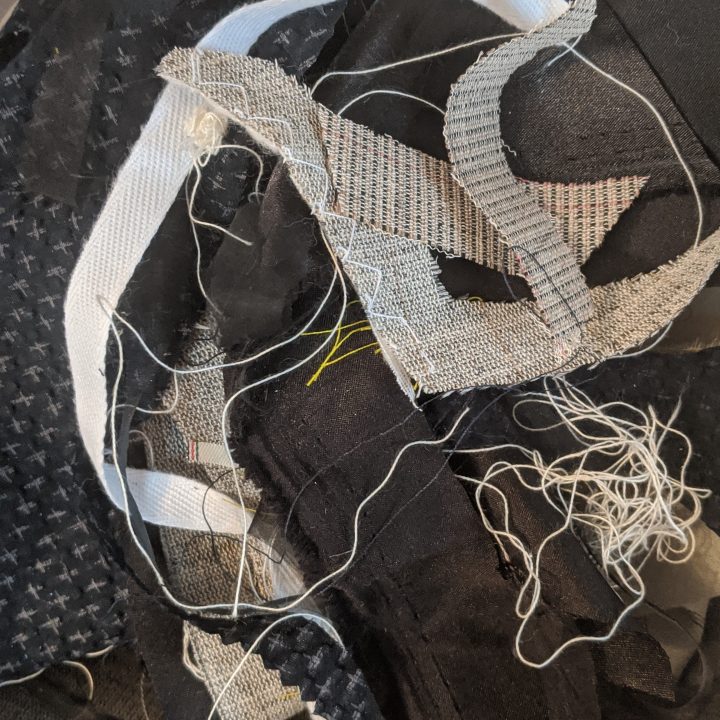 My last post was mostly about a big mistake that I made. But that’s all in the rearview mirror now. It’s full steam ahead on the Covid-19 blazer.

This post will cover some simple tailoring techniques. Keep in mind that I’m not a professional. These are just some techniques that have worked for me, and they can work for you too.

I think it’s safe to say that we’re all interested in elevating our workmanship. This is especially true for sewists interested in tailoring. The work can be slow……very slow. But it can be so very rewarding. So here we go….Geek out!

Because my seersucker is light weight, each piece is underlined with silk organza. I’ve never done this before, and at this point I can’t recommend it highly enough. It has totally transformed the hand of my fabric. If you’re not familiar with it; organza is almost weightless, sheer and “springy” as opposed to “stiff”. I cut it out using the pattern pieces and then baste it onto the wrong side of the fashion fabric. The resulting effect makes the seersucker almost wrinkle proof. When scrunched up, the fabric wants to spring back into shape. It’s like magic.

Eventually I will trim it out of the hems, but for now it’s just about getting each piece underlined. Cotton basting thread makes this process go smoothly.

There are four darts on V9262, and they contribute greatly to its trim fit. It’s really important that they be done well. I basted around the darts as part of the initial basting process. The dart is marked with tailors tacks. I folded the dart and basted once again close to the stitching line to hold everything in place. The organza wants to spring open, so it needs to be “tamed”. I stitch from the bottom to the point and then tie off the threads with a good knot. This is a good couture sewing habit to get into. If the dart were ever to be pulled open at the tip, it would be near impossible to fix. A knot solves that problem. Who says you can’t do couture sewing!

After stitching the dart I used a very small pair of bandage scissors to trim the organza out of the dart. I use these little scissors all the time and find them invaluable. Trimming the dart made it press much better. And speaking of pressing. There was a question about pressing seersucker on my last post, and whether it would flatten out. That has not been an issue. The pucker is woven into the fabric and can’t be pressed out.

Most of the work on a tailored jacket is spent on the fronts. I’m going to be using a pre-made canvas, so all the pockets have to be made first. The pockets at the hip extend from the jacket front to the side panel, so those two pieces need to be sewn together first. So here’s a tip on how to do that.

If a jacket has a significant amount of “waist suppression” the front pattern piece will have a substantial concave curve to it. This makes your jacket nip in at the waist nicely. This Vogue pattern has lots of shaping. Your instructions may have you clip this seam once the front and side panel have been stitched to make it lay smooth. (This pattern calls for it).

Clipping the seam is completely unnecessary. Not only does it weaken the jacket, it makes future alterations at this seam impossible. For a man who might gain weight in the front (like me!), this is the seam that would be let out to make more room for a “protuberance”. (That’s tailor talk for a beer belly!) Here’s how to do it.

Take your iron and “bend” the curve in the opposite direction. (Make it convex) Stretch and bend while applying your iron only along the seam allowance. The steam will help it maintain the shape. When the front piece is returned to its natural position, you’ll notice that the seam allowance will be all wavy. Now you can stitch the front to the side, and there will be no need for clipping.

Vogue 9262 calls for almost all of the pieces to be backed with fusible interfacing. I’m talking ….. fronts, back, facing, collar! I really have a hard time wrapping my head around that. I think it’s fair to say that if we’re taking the time to make a tailored jacket, we deserve better. I tend to go “deep into the weeds”, but it’s just because I enjoy the process and all the traditional materials. But it’s not necessary to do everything, and there are steps I skip. And even though I don’t use them often, there’s a time and place for fusibles. But a whole jacket? Sorry, I can’t.

Welt pockets. I won’t go into how to construct them here. My suggestion is to find a text that will guide you. I mention it all the time, Roberto Cabrera’s text is the one for me. The advantage of a good text is that you can skip the pattern instructions and make a pocket that “works” for you. I’ve made his double welt pocket enough times that I feel comfortable with it. And that translates into a successful pocket.

The helpful hint here is to baste a muslin reinforcement 2″ wider than your finished pocket behind the pocket placement line. After all, you’re slicing a big hole right in the middle of your project. That’s why we fear welt pockets, right? This just makes good sense. Additionally, if you’re going the traditional canvas route, the reinforcement will eventually get sewn to the canvas to help stabilize the pocket. So a fusible would not work in that scenario.

I’ll end this post with a little tutorial on how to make a better pocket flap. It may take a little more time, but you will never be irritated by having the lining show on your finished flaps. Because, let’s face it, that’s so unprofessional.

Start by redrafting the pattern piece. The finished width of the flap should be 2.5″. You will want a 1/4″ seam allowance on three sides and 3/4″ at the top. It may be hard to see, but I applied a fusible interfacing to the backside of the flap. Pro-Weft Supreme Medium Fusible from Fashion Sewing Supply is my “go-to”.

Baste the flap face down on a piece of lining that is face up. (Right sides facing).

Using the flap as a pattern, cut out the lining.

Here’s the tricky bit, so just be patient with yourself. Pull the edge of the flap back, and baste it in place with small stitches to make a border of lining about 1/8″ wide.

Now trim off the excess lining.

Almost done. You will have better luck sewing with the slippery lining on top. Stitch at 1/4″, trim the seam down, turn and press. You will now have a neat little border of the jacket fabric on the backside of the flap. No more lining peeking out around the edges. Go on and celebrate your tailoring skills!

Now it’s just a matter of sliding the flap up into the welt and completing the pocket.

Once the pockets are finished, my attention turns to the canvas. But that’s enough tailoring geekery for now. Hopefully everyone is staying out of harms way and finding solace in the act of making something. Until next time.