I took a much needed break from this project. It’s easy to forget just how labor intensive a tailored jacket can be. But it’s time to get back on the horse, as they say.

When I left off I was completely baffled by the collar construction. I read and reread Cabrera’s instruction to the point where I felt comfortable just jumping in with both feet. Why so reticent? He has you discard the pattern piece for the collar. The entire collar is hand stitched using just the undercollar as a reference. “Sewing without a net” I call it. What follows is just a glimps of the process. 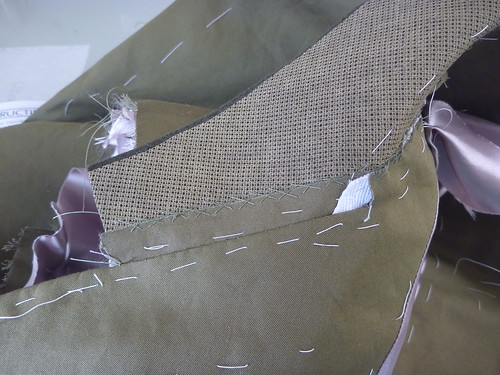 I trimmed the seam allowances off the collar pattern to use as my undercollar pattern. I just didn’t trust the Vogue undercollar, which seemed too small. I cut the undercollar from felt (B Black and Sons) and interfaced it with a fusible French canvas that I picked up at Steinlauf and Stoller in NYC a couple years ago. This proved to be a huge time saver. Otherwise, I would have been back to padstitching. I’m always a little leery of fusibles, but this stuff worked perfectly. As you can see, the canvas is cut a bit smaller than the felt so that none of it will be visible in the end. Here you see the interfaced felt, cross stitched to the neck opening. 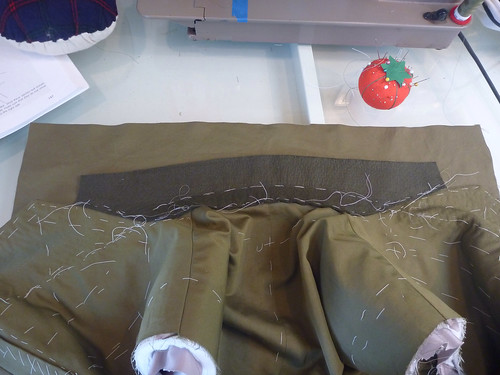 This is where it gets scary. There is NO pattern for the upper collar. The felt is basted onto a rectangle of the fashion fabric, and the entire collar is created “on the fly” around the felt. 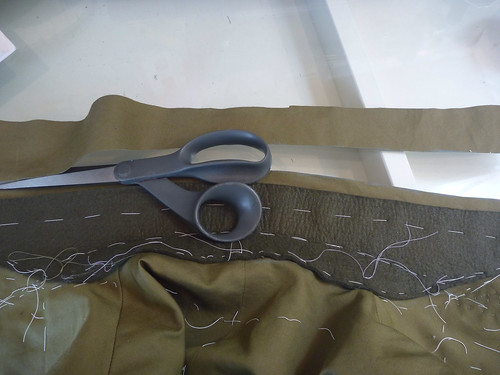 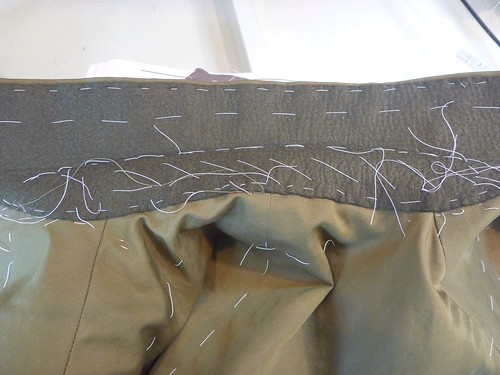 Did I mention basting? 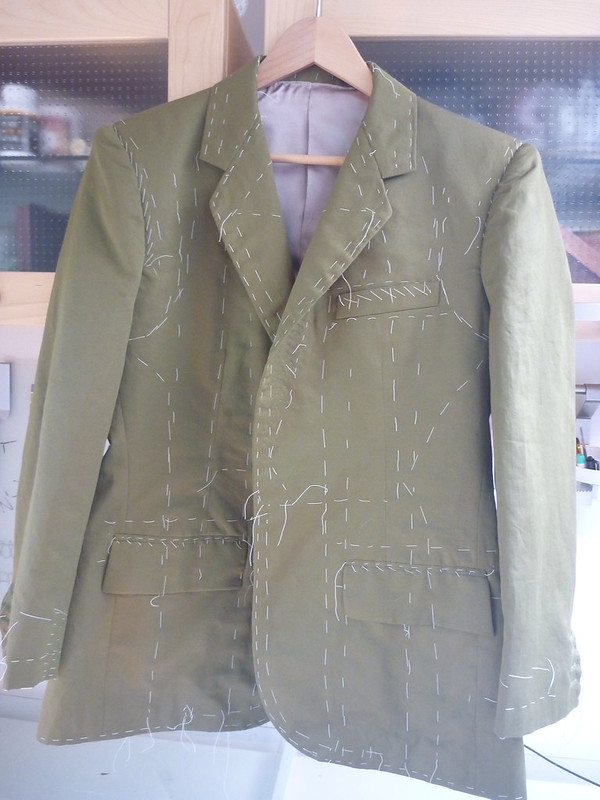 Thankfully, it all comes together in the end. Simple or fast, it IS NOT! The result, though, is probably better than what could be achieved by following the pattern instructions. I’m glad to have this step behind me, and relieved that it turned out as nicely as it did. Trust me, there were moments when I really had my doubts. And really, is there anything more strangely constructed than a man’s jacket? 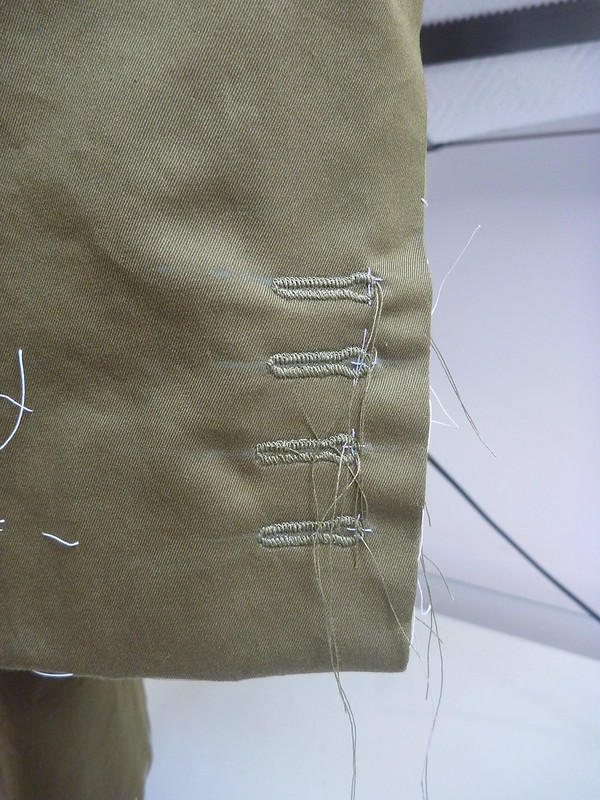 The buttonholes are done. I always hold my breath at this point. The last thing I need is for my vintage Singer buttonholer to start acting up. I’m pretty sure we’ve all had that OH F$&@ moment with buttonholes. I owe the sewing gods for sparing me this time around. I will cut these open later so that they’ll be functioning, a “distinctly custom touch” according to Cabrera. 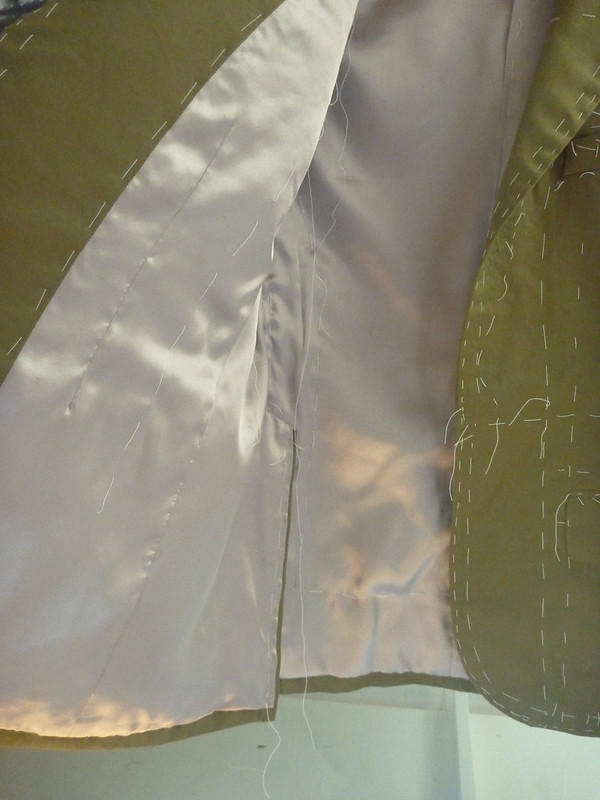 An entire day was spent handsewing the lining. Working with polyester acetate is my idea of hell on earth. Next time I’m picking a jacket pattern with a single vent! Working around two vents was almost enough to break me. Fortunately, I’m pleased with the result, but my enthusiasm for this project is flagging. I really need a break from all the handsewing. Hopefully the pants will be easier. It will seem novel to actually use a sewing machine! Forward March. The end is almost in sight. 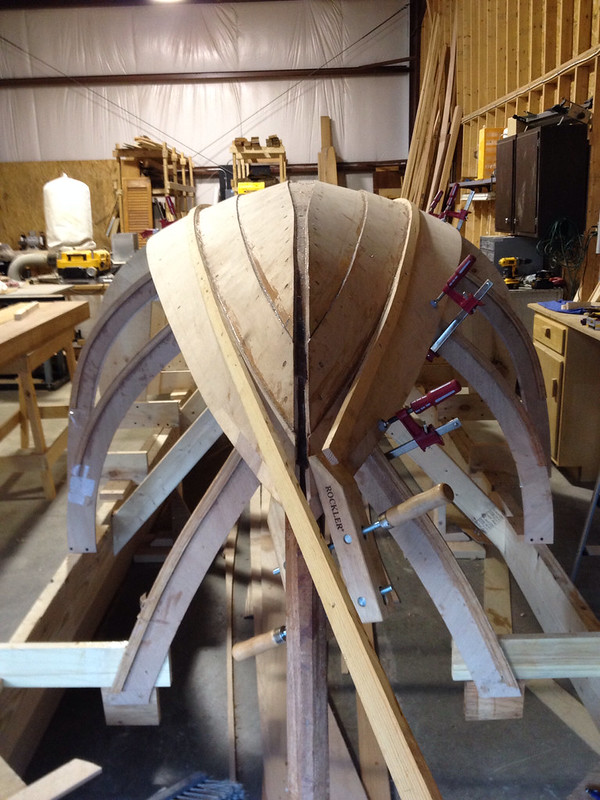 6 thoughts on “Back from a break. Soldier on, Dad.”