I live in New England, and I shouldn’t complain, but damn it’s been miserably cold lately. So it’s been a good time to stay in and work on a project.

The kilt is temporarily on hold. As suggested by one of my readers, Craig Thomas, I purchased the book The Art of Kiltmaking by Barbara Tewksbury and Elsi Stuehmeyer. I have so much invested in fabric that it seemed foolish not to have the ultimate kiltmaking guide, which it most certainly is. I’ll use the Folkwear pattern to make the jacket and vest sometime down the road.

Before I even consider starting the kilt project it’s clear that I need a really GOOD set of measurements taken. A kilt sits higher than most men wear their pants and should come just to the top of the knee cap. Nothing’s worse than a grown man in what looks like a naughty catholic schoolgirl in a plaid mini-skirt! Good measurements are crucial to the whole endeavor and hopefully they can be taken within the next week. While I’m at it, I’m also hoping my measuring buddy, who is recovering from the flu, will be willing to take a full set of measurements as outlined in Lori Knowles book The Practical Guide to Patternmaking for Fashion Designers — Menswear. One of my sewing goals this year is to draft both upper and lower slopers. At some point I’d like to be drafting my own patterns. Hey, a guy has to have a dream, right?

So, while the kilt is somewhat dead in the water, I’ve decided to work on a muslin for a spring jacket.

This is my inspiration, which is from Brioni’s spring 2013 collection. I thought lapel-less jackets were ridiculous until I saw this. Is is the color? the tailored shorts? the beard? The hat? Who knows, I’m totally loving the look. It’s casual and age appropriate for me. It also looks pretty easy to make. The only details are patch pockets and some top stitching.

In order to replicate this look I’m going to be riffing off this vintage Bill Blass pattern, which shows up on eBay and Etsy frequently. Mine looks like it has never been taken out of the envelope. Maybe the initial purchaser took one look at the 12 pages of instructions and went running!

Menswear is relatively static, sort of a “theme and variations” world. Features get added or subtracted from season to season, but underneath it all there are just a few basic designs. This three piece suit strikes me as a great basic pattern.

The lapel width is reasonable and there are darts in the front to add shaping. It also features a double back vent and sleeve vents.

A pretty classic silhoutte that could easily be worn today. My plan is to chop off the lapels at the roll line and “voila!”, Bill Blass 1980’s? turns into Brioni 2013. So, on to the muslin. 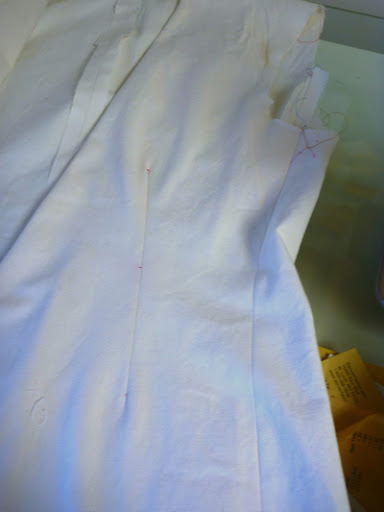 I’m using a set of lightweight canvas tab top curtains that I picked up at Goodwill for $6. The construction is very straight forward. So far I’m finding that there’s a lot to like about this pattern. The front darts add some nice shaping, which is further enhanced by the shaped side seams. This coat should nip in at the waist just like the Brioni.

There’s just the right amount of easing at the shoulder seam. This helps shape the upper back and shoulder area of the jacket.

The amount of easing at the sleeve cap is reasonable. Sometimes there’s just too much fabric. Not so here. With shoulder pads and sleeve heads the dimples should press out nicely.

I lopped off the lapels so that the roll line will become the finished edge of the jacket. The front facing was cut to match and I fashioned a back neck facing. As I work along I’m anticipating that the sleeves will be too long and that I’ll want to shorten the body of the jacket. Next time I’ll model the muslin and we’ll see if I’m right.

It feels good to be working on a project again!

5 thoughts on “Trying to be productive”