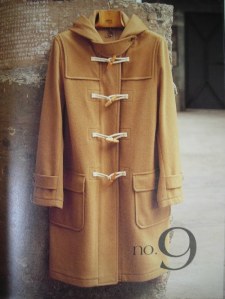 Just in case you’ve forgotten, here’s what I’m trying to make.  The only remaining pattern piece to make has been the yoke, and it’s turned out to be a 2 day mind bending experience.  It didn’t affect the muslin version so I could ignore it, but it’s a major design element of the coat which I needed to resolve.  It’s one piece, cut on the fold, which will drape over the shoulders both front and back.  It’s a crazy shaped piece which takes up a big chunk of my fabric “real estate”, so I can’t afford to screw it up.  Of course it doesn’t help that I’ve changed the shoulder line and slashed and taped the front and  back pattern pieces multiple times.  The whole yoke pattern needed to be redrawn to fit. I had a stiff mojito before attempting to work on it last night which was a huge mistake.  I kept shuffling between the original pattern and my enlarged pattern, laying one over the other until I was completely befuddled and decided I should just go to bed.  I decided to tackle it again today sans alcohol, but I’ve still spent a huge amount of time trying to figure it out.  Hopefully it’s right because I will be cutting it out tomorrow morning.